A friend of ours from church said something this morning that struck me as both profound and incredibly appropriate for this day, May 31, 2020. She said, “We need to listen until it hurts.”

She was speaking, of course, about our horrendous problem with race in this country.

So I beg you, my white friends, brothers and sisters in Christ, please listen. If this discussion bores you or disgusts you or makes you angry – for the sake of all that is holy, please press PAUSE and hear me out.

I know this is complicated. I know we all feel powerless. I suspect most of us feel like it’s a problem for someone else because “I’m not that racist bigot” that was on the news.

But here’s the thing. What we (white people) have a hard time understanding is what it’s like to be a black person in America. I always thought it was just about equal access to college and jobs, which I assumed had all been addressed by the equal rights amendment and subsequent programs. That in today’s world if we just tried hard enough, anyone could make it in this country. I even knew some black people who had managed to come a long way from their early experiences and were doing quite well financially in their adult life – which I thought proved my point.

Of course what we don’t know, truth be told, is that the challenge of equal access is bigger than we know, and for reasons we know very little about. But that’s not where I’m going.

Consider something I saw recently. A father of two young daughters has to take one or both of them with him when he wants to walk around the block. Because then he will be seen as a family man who loves his kids, rather than a 6’ 2” athletic black man who might be dangerous. So that if a police car happens down the street and the officer rolls down the window to ask him what he’s doing in a predominately white neighborhood, his life will not be in danger. To use his own words, “I need my little daughters with me to keep me safe.”

Or consider what happened last Monday, when an emotionally challenged woman called 911 and pretended to be terrified of being attacked so that the dispatcher could potentially send out a swat team to take down a black man who had insisted that she adhere to the rules in Central Park. She might as well have reached into her purse and drawn a loaded weapon on him. It would have been the very same threat.

Or when a black man recently stopped at a gas station to fill up his car, and some woman called 911, and the man is instantly surrounded by policemen who challenge him to prove his innocence while discounting everything he says. Nor do they let him go until a white man comes to his rescue and vouches for him. And what caused all of this? The woman who called had heard something about a black person in the neighborhood who had committed a crime. And what if no white man had stepped up to vouch for this black man?

No one should have to endure this kind of terror.

For those of us who are white, the police force is usually something we hope will keep us safe. They help to create a social environment within which 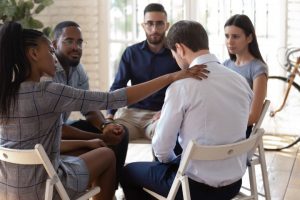 we can live more at ease. But what we don’t know is that those around us who are black do not live in that context – they live in what is for them more like a police state. Where any false move or statement can get them stopped, questioned at length, pushed to the ground, beaten, shot, or chocked to death.

We don’t want to hear these stories. We may not even want to believe them. We think “they must have done something else that you are not telling me.” And we think that because that is what we would expect in the case of a white person in those situations.

What we don’t want to know is that we still live in a place where people of color are quite literally “marked” for an entirely different kind of experience from all that we normally call the “justice system.” They live within an environment that is entirely foreign to us; a system we would hardly think possible in a civilized country in the twenty-first century.

So what am I to do? What could I even possibly do? I mean, I can’t change the whole system! I’m not that powerful. What do you expect of me?

Listen … until it hurts.

For the very first step, make a friend who is African-American and LISTEN to the stories they have to tell. And press the PAUSE button as you listen, so that you do not try to figure out why they should have done something different, or why those things should not have happened , or whatever thoughts you might have that would allow you to keep it at arm’s length.

And Listen … until you hear what it has meant to them to have to live this way … as less than full participants in a way of life we take for granted.

Get to know them until you care about them as your friend. And then listen … until it hurts.

Only then can we think about where we go from there.